Only a few years after the founding of Mission Santa Cruz, another group of Spaniards came to Santa Cruz on a very different sort of mission. In 1796-97 Lt. Alberto de Cordova, a Spanish military engineer, and Diego de Borica, governor of Las Californias, came to survey the area for a new civilian settlement. The site they selected was across the San Lorenzo River from the Mission, up the hill and out of the flood plain. The governor proposed to call the new establishment Villa de Branciforte. Where did that name come from?

Unlike the missionaries, Borica did not choose to honor a saint or a holy day. Being a smart politician, he named the new town after his superior, Don Miguel de la Grua Talamanca y Branciforte, Marques de Branciforte, Viceroy of New Spain. In those days, the length of a man’s name and title indicated his social status, so Branciforte apparently enjoyed a rather elevated level. He was actually born in Sicily, became an officer in the Spanish army and rapidly rose to prominence through political skill and marriage into a Spanish noble family. Our home town thus acquired its first Italian name many years before any Italian ever set foot here - Branciforte never saw the town named after him. The Villa was one of only three civilian pueblos established in California under Spanish colonial rule: the other two are Los Angeles and San Jose. The designation of Villa meant that it was intended as a settlement for retired veteran soldiers who would act as reserves that could be recalled to active duty if needed. That method of colonization goes back at least to the Roman Empire. 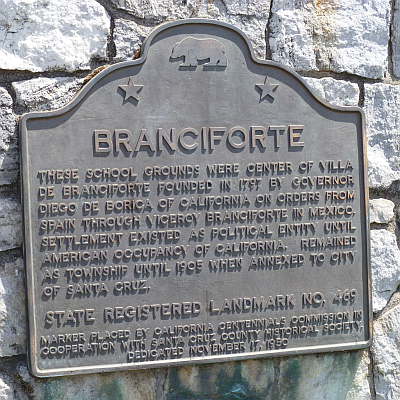 The Villa centered where Branciforte School is today - the State Historical Site monument is on the front lawn. Villa boundaries were roughly at today’s Soquel Drive on the south, De Laveaga Park on the north, Branciforte Creek on the west and Morrissey Boulevard to the east. The Villa also had grazing rights on ‘common lands’ extending as far as Aptos Creek [or Soquel Creek - the area between was disputed with the Mission]. Despite the local attractions, the Spanish colonial government had trouble inducing folks to leave their homes in established towns in Mexico and move a thousand miles or more to the isolated wilderness of California. Nevertheless, the first census listed forty men, women and children living in thirteen households at Branciforte in 1797. A year later, this group was supplemented by a few more civilians and six retiring soldiers, still young after a 10-year enlistment. By 1799 the population had grown to seventy; in 1801 it reached a high of one hundred and seven, including twenty veterans.

From the start, the worldly ways of the Villa clashed with the pious padres across the river. The main street doubled as a race track [laid out long, straight and level]. Dog fighting and bear baiting were popular activities (the area had many bears back then). These pastimes were, no doubt, accompanied by a certain amount of drinking and gambling. Some Branciforte residents raised suspicions by choosing to build their dwellings hidden in the trees down along the creek, rather than on the open hilltop where they could be observed from the Mission. Another Mission grievance was that the Ohlone converts (neophytes) were tempted to sneak off to party across the river, neglecting their labors and religious duties. Actually, that sounds a lot like me as a teenager at church summer camp – I guess some things haven’t changed so much in 200+ years.

The Villa’s fortunes varied through the years, but it never established itself as a commercial center. Instead, the City of Santa Cruz grew out of the industries established by the Mission, and eventually annexed the Branciforte neighborhood in 1905. A little remembered fact is that, following California statehood in 1850, our county was originally named Branciforte County Protests by citizens living on the other side of the river soon got the name changed to Santa Cruz County. Still, the name Branciforte is not forgotten, even if few know its origins or its founders. The old main street of the Villa is today’s North Branciforte Avenue. We have two Branciforte schools and a Branciforte library. Nearby is Branciforte Creek, its course followed into the hills by Branciforte Drive (named after the creek, not the Villa). The one remaining Villa structure in the area is a private home known as the Branciforte Adobe. The most impressive use of the name is at Branciforte Plaza, the nicely-executed conversion of an old hospital which has, however, no relationship to the old Villa.[The hospital was built on the site of the original Branciforte School.]

A few of the Villa’s founding family names can still be seen on signs around the area, although not inside the original boundaries. These include: Arana Gulch (above the Small Craft Harbor), Rodriguez Street in Live Oak, [the Rodriguez-Neary Adobe] and Pinto Lake in Watsonville. Another early family, the Castros, rose to prominence in the next era: the Ranchos of the Californios [, as did the Rodriguez family].