(updated )
While reading over this article for updating, it seemed appropriate to change the title from "...In the 1880s" to "...Enters the 1880s". Forty posts to reach the threshold of 1880, and there's already a list of about half a dozen "fill-in" articles on pre-1880 subjects. But first priority is to get all of the Santa Cruz Patch posts moved over here, and there are now only about ten left, so on we go. 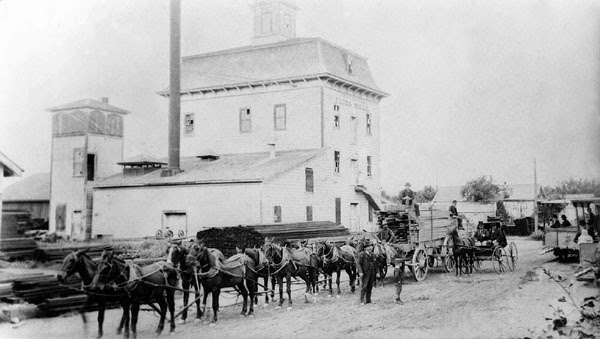 In a recent post, the year 1880 in was described as “the end of the old [stagecoaches] and the beginning of the new [railroads] in travel”. 1880 was also, in many ways, near the top of the curve for as an industrial center. As historian Susan Lehman wrote:

“By 1879, had developed into a notable manufacturing area. There were five shipping points within the county limits, mills turned out 36 million board feet of lumber a year; five lime kilns, employing over two hundred men, produced the highest quality lime for mortar in the state. There were four flour mills, a sugar manufacturing plant, a chair factory, a glue factory and several tanneries. The largest and most important of the County's manufacturing facilities was the California Powder Works.”

The photo above, from right around 1880, shows one of those four flour mills and one lumber yard. The Centennial Flour Mill, on lower Pacific Avenue, was built in 1876 and burned down in 1886. The wagon in front is hauling rough lumber south on Pacific Avenue to the Grover Brothers lumber yard and planing mill, where stacks of lumber can be seen to the left. The Grovers had timber rights and a sawmill above Soquel. Other signs of the times - see that Second Empire-style mansard roof? And the horsecar at far left?

All of the industries mentioned were at or near their peaks in 1880. They had grown rapidly in the preceding decades, but began to plateau around 1880, finding a decade or two of stability before later declines. Some older industries, like raising cattle for hides and tallow, were already fading away – although tanning continued locally until the final shutdown of Salz Tannery in 2001.

The timber and lumber industry was still in its expansion phase, assisted by the arrival of railroads with their ability to efficiently transport large quantities of heavy and bulky materials. Steam engines also powered larger and faster sawmills than the previous water-powered versions. 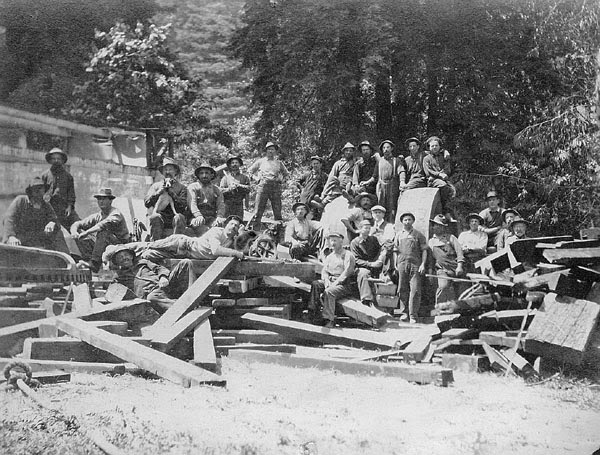 Once the two rail lines into the county were operational, the local rail network branched out into untapped timberlands throughout the . Even that resource, however, which seemed inexhaustible in 1880, was mostly gone by the turn of the century, taking with it many small mountain communities and wood-related businesses.

Commercial agriculture continued a steady pace of growth, although specific areas within the industry came and went. Wheat and sugar beets declined, while wine and apples increased. Most of today’s important crops, like strawberries and winter vegetables, were still in the future. 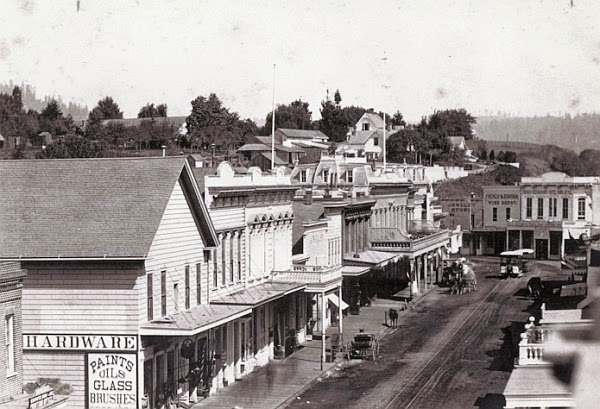 The 1880 photo above shows the north end of Pacific Avenue. At far left, a corner is visible of the 1868 McPherson building that still stands today at the corner of Pacific and Locust. Another Pacific Avenue Street Railroad horsecar can be seen at the head of Pacific - perhaps the same one as in the top photo. Behind the horsecar is a narrow 2-story building with a sign saying "French and Sonoma Wine Depot", evidence of the growing (literally) interest in wine. Local vintners the Jarvis brothers also had a wine store in this block (on the right but not visible in the photo). The wide wood plank sidewalks border streets yet unpaved - the first bituminous rock street paving was still a few years off.

Tourism, another of today’s dominant local industries, was growing but still a decade away from the beginning of its peak years. The first bathhouses had appeared at Main Beach, and Fred Hihn's Camp Capitola was up and running, but tourism's heyday was just beginning. The story of gilded-age local tourism is inextricably intertwined with the story of promoter Fred Swanton, who will be the subject of future posts.

The end of locally-owned railroads came in 1881, when Frederick Hihn split with his partner in the Santa Cruz Railroad, Claus Spreckels. Soon after, Hihn sold the failing company to Southern Pacific, which achieved a county rail monopoly by acquiring the South Pacific Coast Railroad a few years later. The SP brought many changes to over the following decades, including the gradual conversion of all the narrow-gauge tracks to the wider tracks still in use today. The narrow-gauge tracks on remained in use by Hihn’s horse-car line, which he also sold off to concentrate his energy on the lumber business. Subsequent owners expanded the light-rail system into new Westside and Eastside neighborhoods, and on to Capitola.

Another industry was growing in other parts of the state, but failed in – oil. Not completely, however – most of the local petroleum was locked up in layers of sedimentary rock. This “bituminous rock”, as it had come to be known, gave rise to a new industry – production of a natural paving material similar to modern manufactured asphalt paving - more on that to come.

The population of the County continued to grow rapidly, although more slowly than in the previous three decades. Eastside and Westside Santa Cruz expanded and filled in, Capitola began its conversion from tourist tent-camp to town, and grew along with the agriculture of the . Spreckels’ sugar plant became a major employer, although actual sugar beet farming moved steadily into the area.

Many successful county pioneers in industry and commerce were ready to ease up and enjoy the fruits of their labors. New residential neighborhoods provided space for their new homes large and small. Most of our best-preserved and treasured examples of residential architecture were constructed during the 1880s and 90s. These homes included ’s newfangled electric lighting, and some had the even newer telephone.

That’s a brief overview of in the 1880s. Next post will begin exploration of some specific people, places and events.